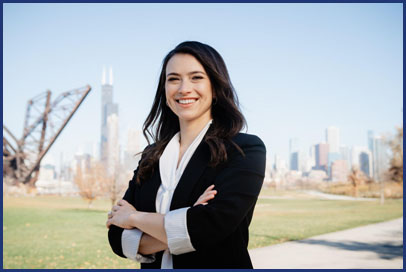 Prior to being elected to represent Illinois’ 12th legislative district, Margaret served as Deputy Chief of Staff for the Illinois Department of Commerce and Economic Opportunity (DCEO). In that position, Margaret managed a multitude of projects on behalf of the Director, was a lead liaison to the Governor’s Office, and was Secretary-Treasurer to the Broadband Advisory Council.

She started her campaign for the Illinois House of Representatives in 2019 to fight for women, small business, and the LGBTQ community. She’s passionate about jump-starting our economy and helping Illinois attract new industries. Margaret’s previous experience gave her a wealth of knowledge on Illinois’ unique issues; that’s why she’s a strong advocate of sensible gun control measures, governmental ethics reform, and fair taxation.

Margaret is a proud University of Michigan graduate where she earned her B.A. in political science and communications. An Oak Park native, she currently lives in Old Town with her husband Patrick, her son PJ and her two dogs Winston and Charlie, and a rotating cohort of foster dogs through ALIVE Rescue.